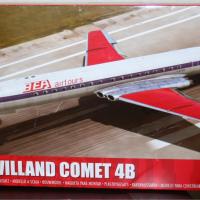 The Comet was the basis of the rebirth of the British civil aircraft industry after World War II. Development began before the war ended, but the first comet didn’t fly until 1949. The Comet 1 had a serious problem, however. About a year after the first commercial flights began in 1952, Comets began breaking up in the air. The problem was traced to the repeated pressurization and depressurization of the fuselage, which caused metal fatigue. The square windows provided a focal point for the stress, and the fuselage would rupture at the window corner. The eventual fix was to make the windows oval, with no corners. The Comet 4 was the model with this fix. The last Comet flight was in 1997. The Nimrod, a reconnaissance and ASW version of the Comet remained in RAF service until 2011

This is a reissue/rebox of the 1960s Airfix Comet 4B airliner. It also has new decals and instructions. 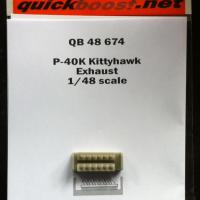 Aires offers a myriad of after-market parts, this being a new offering. Designed for the Italeri kit I wanted to experiment a bit to see how the parts fit on the Hasegawa kit.

The first step is to remove the Aires parts from the part carrier. This is easy to do and quite safe as the parts are not delicate. I used a Xuron part nipper to remove the parts from the carrier, trim away any flash, and then also to cut the six exhaust ports into 3 units of two ports each. That division is required to get the Aires parts to drop into place on the Hasegawa kit. As you can see in the accompanying images, the parts fit nicely and without issue. 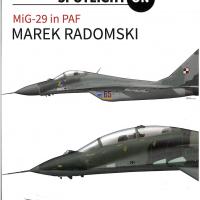 Spotlight on the MiG-29 in PAF (Polish Air Force)

This is a new publication from Mushroom Models Publications. The book includes a brief description of where and how the Polish Air Force acquired its MiG-29 fleet. I was surprised to learn that only the first twelve aircraft were purchased directly from Russia. The bulk of the PAF’s MiG-29’s were actually acquired from Czech Air Force and from the German Air Force (post reunification) when those services decided to cease operating the MiG-29. Interestingly, upon acquiring these used jets, initially the PAF continued to operate the aircraft in the paint schemes of the original operator, so a number of the PAF single-seat MiG-29s operated for a period of time in several shades of green and brown. In 1997, the PAF commenced the overhaul of its MiG-29s. 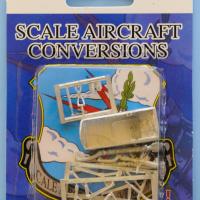 Scale Aircraft Conversions has released replacement landing gear for the Czech Model 4814 / Encore EC48004 Douglas F3D-2 Skynight. The 17 parts supplied include the nose gear bay, nose gear, main gear, and additional retraction arms and braces. One of Ross MacMillan’s passions is the Douglas Skynight, and he spent several hours taking photos underneath one to get this set right. 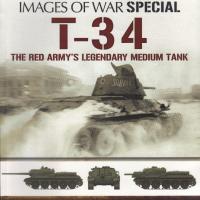 Was the Soviet T-34 the most important tank of the Second World War? It certainly was produced in the largest numbers, 57,000 between 1941 and 1945, more even than the ubiquitous M4 Sherman series. And it was undoubtedly superior to the Sherman in many areas, including armor protection and main armament. And without doubt the most massive and arguably most important armored battles of WW2 took place on the Eastern Front, where the T-34 dominated Soviet tank strength numbers. Did in fact the T-34 “win the war” for the Allies, responsible as it was for inflicting massive damage to more Axis divisions than any other Allied military vehicle? Whatever your answer to this question it is undoubtedly true that the T-34 was an extremely important cog in the Soviet military machine that crushed the Germans and their allies on the Eastern Front.