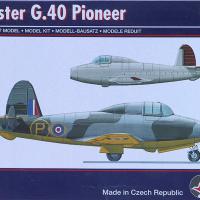 Allow me to start by thanking Pavla Models for their most generous contribution of numerous models for review by IPMS/USA.

The Gloster G.40 Pioneer was the first British jet -- it is also known as the Gloster Whittle or the Gloster E.28/39. There were two aircraft built but the second crashed so this one, W4041/G, did all the testing from its first flight on 15 May 1941 until it was put on display in the London Science Museum in 1946.

I asked for this not because I am particularly interested in the aircraft but because I had just done the FROG version for the Classic British Kits SIG display at Scale Model World (Telford) in 2009. That kit is so bad that I felt I should have a better representation on my shelf. For those of you not familiar with the FROG kit, the wings and fuselage are two different scales and the two figures -- one sitting, one standing -- are also. 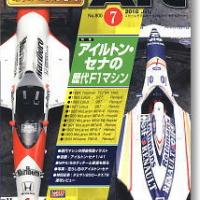 The July publication of Model Art Modeling Magazine celebrates the eight hundredth issue of this periodical, and commemorates this landmark with a special focus on the Formula one cars of Ayrton Senna from 1984 to 1994. The magazine also includes new kit reviews, modeling tips, and new kit and item releases. As is typical for Model Art, the magazine measures 182mm by 258mm (about 71/8 by 101/8 inches), and is printed on thick, glossy paper. The production quality is high with these magazines, and just over half of it is printed in color with black and white pages interspersed throughout of the issue. Just in case this is the first review of a Model Art magazine that you are reading, understand that the entire magazine is printed in Japanese with only an occasional English subtitle for those of us who are monolingual. 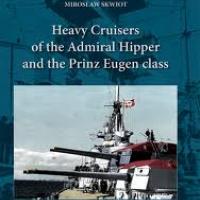 Heavy Cruisers of the Admiral Hipper and Prinz Eugen Class

In the last several years, Kagero Publishing of Lublin, Poland has rapidly expanded, providing a host of publications for modelers. Its newest series is War Camera Photobooks. As the series suggests, it uses photographs from World War Two to illustrate, in this case, German Heavy Cruisers. With the recent release by Trumpeter of the Prinz Eugen and Admiral Hipper in 1/350 and 1/700 scales, this book is a timely release. 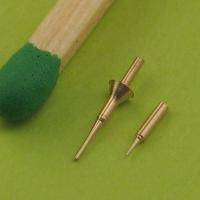 Sometimes fate just sets you up for something great without you realizing it. I keep an F-14 Tomcat (of VF-84) on my desk at work, and not long ago I noticed that I, or someone, had bumped the case it was in, thereby separating the Alpha probe from its place on the nose cone. Before I could remember to take in some glue to make my repair, an offer came out to the IPMS-USA Review Corps to evaluate this very item from a new Polish manufacturer called Master (typically referred to as Master-Models on other internet sites). I immediately requested this particular item, and was pleasantly surprised when I was given the ability to perform this review. 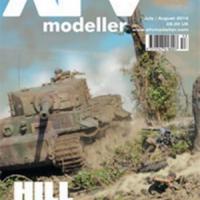 The lead article of this issue, and the cover feature, focuses on a spectacular diorama by Frank Bazin, which he calls Hill 112. It’s a historical vignette of a moment in time. It depicts the British thrust of July 10, 1944 in their vain attempt to break the German hold on Caen, a month after the Allies landed in France. Bazin’s diorama captures the intensity of the immediate aftermath of the British bombardment and is what all modelers should strive for in a diorama. His article focuses on three components of the diorama - the enhancements and weathering of the Tamiya Tiger I, the exquisite scratch built figures which populate the scene, and the foliage that dominates the hill top.