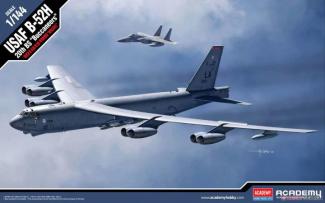 The B-52 is probably one of the most iconic aircraft of all times and the longest serving aircraft in the US Air Force inventory. Designed to carry nuclear weapons during the cold war as a nuclear deterrent, the capabilities have changed since it took to the skies. The first flight of a B-52 was in April 1952 which the cockpit on the first two aircraft was a tandem arrangement similar to the B-47. That design was changed to a conventional side by side seating arrangement on all production aircraft. The first B-52H made its maiden flight in July 1960 and the final B-52H manufactured in October 1962 ending after an eight year production run. The most obvious difference on the B-52H is use of turbofan engines (TF-33) instead of the J-57 turbojet. Upgrades continue to bring new life to the airframe and capabilities but the youngest airframe is 59 years old at the time of this review. 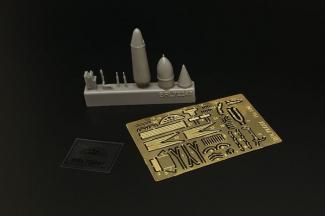 This product consists of a small metal photo-etch stamping which includes detail parts for a 1/72 scale model of a Henschel HS-126, along with some resin parts, including a bomb, smoke generator, and a few other components for the cockpit interior. When I requested this item for review, I assumed that it was the new Brengun 1/72 scale model of the HS-126, but it actually turned out to be only the accessory parts, but that’s OK. No problems. Since there are already three 1/72 scale kits of the HS-126, by Airfix, Italeri, and Matchbox, and I had already built all three, I decided to build the Airfix offering, and painted it in Spanish Civil War markings, as I already had several in the usual German Luftwaffe paint schemes. 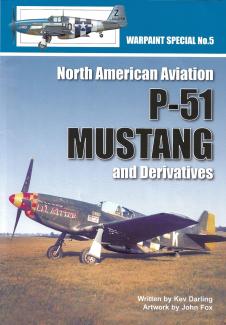 This is volume five in the special series. Warpaint books are well known to the modeler and historian alike and this book follows the same pattern as others in the series. The book is divided into 15 different chapters. Beginning with design and a look under the skin the first two chapters cover the development of the Mustang from prototype to P-51H as well as a look at structure and various difference between the models such as engine, armament, and other components.

The next nine chapters cover the Mustang in WWII, from its beginnings with the RAF and its use in North Africa through all major Army Air Force use. The US Air forces covered are the 8th (longest chapter at 16 pages. Followed by the 12th,15th,7th,5th,10th, and 14th in that order. Each AF chapter gives and overview of the AF and its fighter squadrons and their combat deployments and uses. 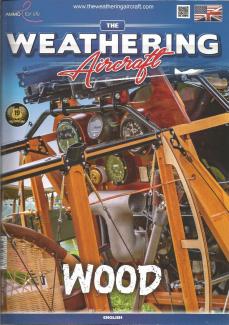 Viewing the products and publications shown at the link provided below will be an aide to those reading this review. 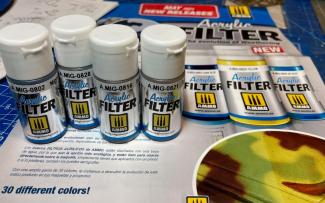 This is a review of four of the new Acrylic Filters from AMMO by MIG Jimenez.

These filters are produced using a innovative formulation, the Acrylic Filters can be reworked or eliminated simply and easily with water during the extended dry time, each filter will dry completely in 24 hours. The filters can also be applied by airbrush. The range consists of 30 colors currently. The filters can even be mixed with each another or tinted with other AMMO acrylics. The acrylic filters can be diluted and cleaned with water.

I used all the filters on some finished and in-build kits and the effects and application were awesome. The effect once applied is subtle and is very easy to use. I can see me getting a lot more of these.