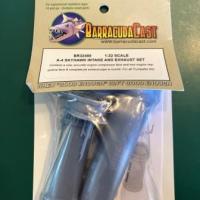 A-4 Skyhawk Intake and Exhaust Set

Roy Sutherland of Barracuda Studios is back… and this time with a totally unexpected item; a 1/32 Exhaust and intake set for your Trumpeter A-4.

Consisting of four printed resin items, this one is truly necessary for tightening up a neglected area of many models.

The exhaust turbine section has the four support blades and centerline flow bullet molded as one piece. Easy to paint on this non-afterburning engine. And for those who like to look up the chute in every orfice in a model competition, this item will take care of the look. 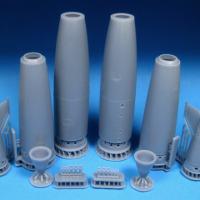 “The Aero 1D 300 gallon tanks were widely used, and were carried in this configuration by all variants of the Skyhawk as well as the F4D Skyray. This set consists of a pair of highly accurate and detailed 3D printed droptanks, complete with separate shackles for mounting to pylons. Drop tanks are printed hollow, so they will not weigh down an already large and heavy model. These tanks replace the inaccurate and less detailed tanks found in most 1/32 kits.”

Released to accompany the “KAHU” conversion, it is also valid with the standard A-4. Comprised of four parts for each tank and a set of six mounting brackets (Spares included, heck yes I tested it out)

This took me all of 20 minutes to finish the review set. CAREFULLY remove the parts from their stanchions, lightly sand, and CAREFULLY superglue with slow setting stuff. 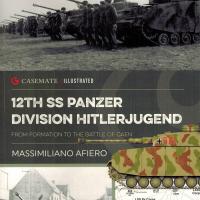 12th SS Panzer Division Hitlerjugend Vol. 1-From Formation to the Battle of Caen

The book is part of Casemate Illustrated Men/Battles/Weapons Series. This book is Volume One of the 12th SS Panzer Division history. The book covers the formation of the unit through the fourth Battle of Caen encompassing the events between February 10, 1943 and July 7, 1944, at which time they became part of the German forces trap in the Falaise Pocket. The book is divided into seven sections and an epilogue. It also contains a bibliography and index. The sections are as follow: 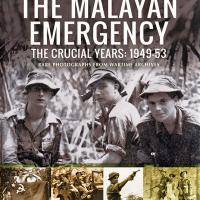 Images of War: The Malayan Emergency – The Crucial Years 1949-53

From 1948 through the 1950s British and Commonwealth forces fought a ruthless communist insurgency on the Malay peninsula. Thanks to sound generalship and the dedication and resilience of the officers and men, the security forces eventually broke the terrorists' resolve.

This book charts the service of one particular unit, the 1st Battalion, The Suffolk Regiment, throughout their tour of duty between 1949 to 1953, the most critical years in The Emergency. The book describes in text and photos how the Battalion – which was mostly made up of National Servicemen conscripts – was able to operate in the oppressive climate and jungle conditions of the Malay Peninsula. Its success was built on good leadership and those most elusive of factors, good morale and camaraderie. 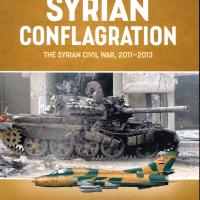 Author Tom Cooper is an Austrian aerial warfare analyst and historian. What makes him qualified to author a book on a very non-linear and confusing chapter of history is the vast network of contacts he garnered throughout his time in the Middle East and Africa. He has authored/co-authored about 60 books, over 1,000 articles, and is the Helion Series Editor for Africa, Asia, Europe, Latin America, Middle East, and Technology at War. When someone with Tom’s credentials writes a book about a topic that you’re interested in reading, you pick up the book and prepare to be educated.