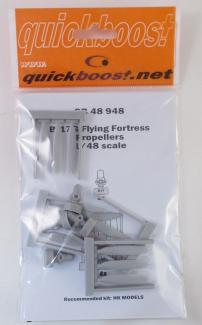 The HK B-17s are really good kits. They could use some details added here and there. One of those places is the props. They are slightly misshaped. They are wider than they should be at least to my eye and to obviously Quickboost as well. Judge for yourself with the photos.

There are four prop hubs and 12 prop blades. They are all packaged in the resealable packaging that Quickboost uses with a card stock backing to protect the parts. There are 16 flawlessly cast light grey resin pieces included, four hubs and 12 blades. The blades are keyed to the hubs so there is no need for an alignment tool. The detail on the hubs is flawlessly executed and the blades are suitably thin and correctly shaped.

The only real work is to drill out the back of the hub and insert your own mount or wire.

Painting is easy enough with the yellow tips and the hubs and blades being flat black. You will have to supply your own decals as none are provided. 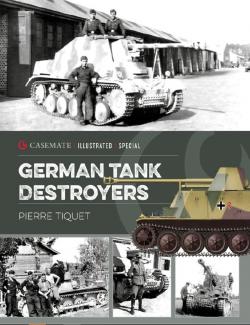 The book goes into details of the German Tank Destroyers used in World War Two.

The different tank destroyers are fully defined, and their evolution described in the various chapters in this book. The different types, strengths, and weakness are also covered. The book includes the actions there were used in in great detail and helps make this book a great read and reference material

I found this book fascinating and provides a lot of additional information I have never read before. There are lot of pictures and illustrations that make the book even more interesting. 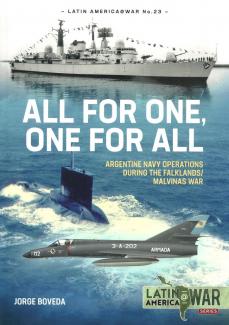 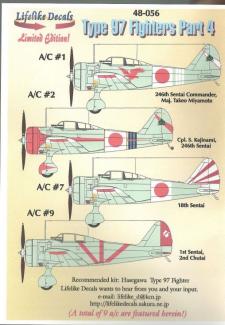 Lifelike Decals from Japan has released its 4th installment in a series of Ki-27 “Nate”. There are a total of 9 aircraft, with 7 of them being of the Japanese “Gray Green” color, which the instructions suggest to replacing with German RLM 02. The other two aircraft are painted in Japanese Dark Green over Gray-Green.

Decals have been printed by Microscale and they have a well-earned reputation for thin decals and in-register sheets. These are no exception. Decals are glossy, look thin, and likely will adhere well to a gloss surface. 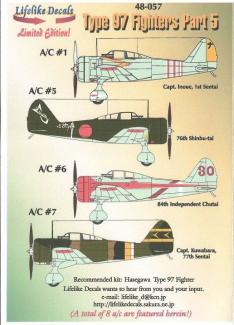 Lifelike Decals from Japan has released its 5th installment in a series of Ki-27 “Nate”. You get a total of 8 aircraft, with 6 of them being of the Japanese “Gray Green” color, which the instructions suggest replacing with German RLM 02.

One of the other two aircraft is painted in Japanese Dark Green over Gray-Green, while the last one is an attractive disruptive camouflage of dark green, green and brown over Grey-Green.

Decals have been printed by Microscale and they have a well-earned reputation for thin and in-register decal sheets. These are no exception. Decals are glossy, they look thin, and likely will adhere well to a gloss surface.