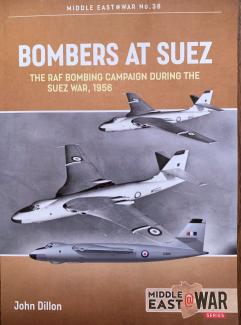 Bombers at Suez – The RAF Bombing Campaign During the Suez War, 1956

The book is volume 38 of Helion & Company’s Middle East@War series and looks at the participation of RAF’s medium and heavy bombers in Operation Musketeer, the Suez War of 1956. The book includes over seventy black and white photographs and seven pages of color profiles depicting the markings of some of the Canberra and Valiant squadrons that participated in the campaign and aircraft of the Egyptian Air Force, along with several maps and order of battle charts.

John Dillon is a former Vulcan navigator and the author of several military history books.

An often-overlooked part of the Suez War of 1956 is the participation of the Royal Air Force’s Canberra medium bombers and Valiant heavy bombers in the campaign. Based in Malta and Cyprus these aircraft were tasked with neutralizing the Egyptian Air Force in order to prevent it from interfering in the eventual assault that was planned to take back control of the Suez Canal. 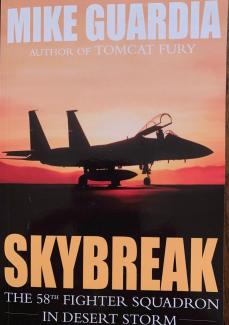 Following Iraq’s invasion of Kuwait in the fall of 1990, the 58th Fighter Squadron was one of the many USAF units deployed in support of Operation Desert Shield – the coalition effort to deter further aggression by Iraq – and eventually Operation Desert Storm, the coalition campaign to forcefully remove Iraqi forces from Kuwait.

Flying the newest version of the F-15C Eagle, the 58th was tasked with protecting coalition aircraft from interference by Iraqi Air Force aircraft. During the air campaign the F-15s of the 58th downed 16 Iraqi aircraft ranging from MiG-29s to Su-22s without a loss. 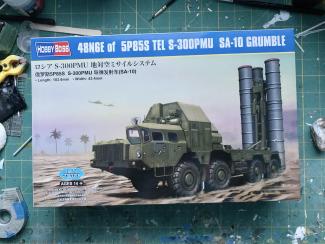 Notes: Missiles not included, only canisters. Instructions are vague on stencil placement. This kit would make a great introduction to armor kits.

First deployed by the Soviet Union in 1979, the S-300 (NATO reporting name: SA-10 Grumble) is a Russian long-range surface to air missile system designed to counter aircraft and cruise missiles. Over the years, the system had evolved to intercept ballistic missiles as well. Regarded as one of the most potent anti-aircraft missile systems currently fielded, it is mostly used in Russia, Asia, and Eastern Europe, though it is also in use by three NATO members: Bulgaria, Greece and Slovakia. In 2007, the S-400 (NATO reporting name: SA-21 Growler), an evolved version was introduced. The S-300 system is basically the Russian answer to the US Patriot missile system. 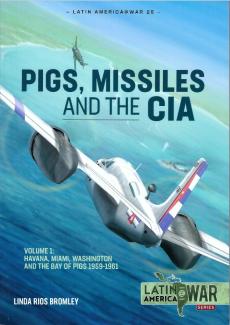 Pigs, Missiles and the CIA

A native Texan, Linda was born in Del Rio. Linda retired from the U. S. Government in 1997, after being employed in various occupations during her 33 years Civil Service career, in which she worked in various locations, including the Laughlin AFB, Charleston Naval Base, USAF HQ Europe, Wiesbaden, Germany, NASA, and the Internal Revenue Service in Houston. She has previously written Flight of the Dragon, detailing the story of Chang-di ‘Robin’ Yeh, a Taiwanese U-2 pilot, and Remembering the Dragon Lady, first-person memoirs of many of the pilots, specialists and family members who supported the early US spy-plane projects. 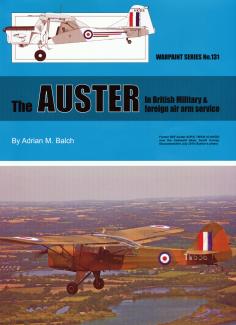 The Auster in British Military and Foreign Air Arm Service

Auster Aircraft started in 1938 as Taylorcraft Aeroplanes (England) license building the eponymous US manufacturer’s light aircraft. During WWII, the company built over 1,600 high-wing Taylorcraft Auster air observation aircraft for the British armed forces, and in 1946, changed their name to Auster Aircraft. Based at Rearsby Aerodrome in Leicestershire, the company continued to develop incrementally the basic high-wing monoplane design, eventually building a total of over 3,800 aircraft for both military and civilian usage worldwide. Auster Aircraft was bought out by the new BEAGLE company in 1960.