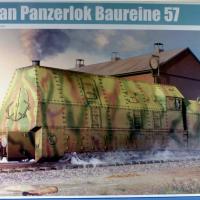 Roadbed parts come in a separate box and will make a roadbed long enough to hold the completed model.

This kit is a representation of the Br 57 Armored Locomotive. There was extensive use of armored trains by the Germans to provide rail security and to suppress partisan activities. Trumpeter has produced almost everything required to assemble an armored train except the tank carrier. This is only made by Ironside. 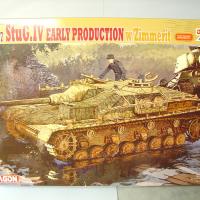 Once again Dragon has taken a previously released armor kit and has added Zimmerit, re-releasing it as a new kit. This is a good thing if you don’t feel you want to try to apply the Zimmerit using various types of putties and tools. To achieve this Dragon provides us with 26 plastic sprues of varying sizes. Two Brummbar sprues, four STUG III G sprues and only a few specifically for the STUG IV, most of the sprues are for the Panzer IV. Total part count comes to 751 parts; the number of unused parts is 207 leaving 544 parts to build the model. Several sprues have the same letter; Dragon gets around this by having one letter in black and the second same letter in blue. I mark the outside of the bags to make it easy to find the right sprue when I need it. 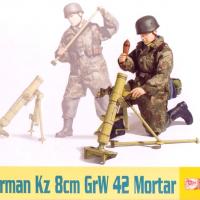 “The kurzer 8cm Granatwerfer 42 (abbreviated to kz 8cm GrW 42) was developed as a lighter version of the standard 8cm GrW 34 mortar. It was commonly referred to as Stummelwerfer (“stump-thrower”) by troops. The smaller size made it particularly useful for German paratroopers who needed a weapon that was easier to move around, but still offered more punch than the diminutive 5cm leGrW 36.

It had a shorter tube than the standard 8cm mortar (tube length is 747mm), but it could still fire a round weighing 3.5x the earlier 5cm mortar weight, two times as far. Furthermore, at 26.5kg, it was half the weight of the leGrW 36. Maximum range was in the order of 1100m. Produced from 1941-45, the kz 8cm GrW 42 could be broken down into three loads for transport. Its effectiveness meant it served with Wehrmacht and other units as well as the airborne users it was originally intended for." 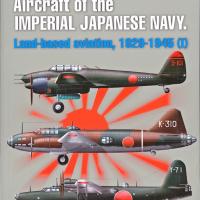 Aircraft of the Imperial Japanese Navy, Land-Based Aviation, 1929-1945 Volume I

This 104-page soft cover book is the fourth title in Casemate’s AIR COLLECTION series about Japanese military aircraft. Like its predecessors, it is an English translation of a Spanish title originally published in Spain in 2008. The book includes 170 full-color aircraft profiles, beginning with a twin-seat 1913 Nieuport NG and continuing up to such naval aircraft in service at the end of the war as the Yokosuka D4Y2 Judy and Model 11 Koo Nakajima J1N1-Sa Gekko. It is obvious the author/illustrator has a great knowledge of the subject and the artistic talent to present it visually. Sixty-nine different aircraft types are represented and the nicely rendered illustrations display the variety of color schemes and national markings that were used by the Imperial Japanese Navy during the period. There are no photographs, but they are not necessary. 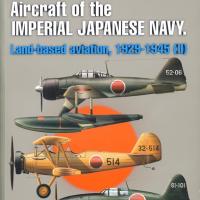 This is a very interesting publication. First of all, the title is misleading. This may be caused by the translation from the original Spanish and my lack of ability to do the same. If the word “Aircraft” is changed to “Aviation of the Japanese Imperial Navy” it would be more accurate.

Secondly this book is a continuation of Volume I. The interesting thing here is that the book apparently begins where the previous volume left off. By this I mean no preliminaries, such as a table of contents, publication data, or an index in the back. There is not even a prolog or introduction. It's like walking in when the movie is half over.