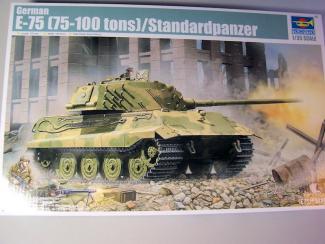 In November of 1944, the German armament giant Krupp proposed conceptual designs that would increase the armament of all Jagdpanzers and panzers currently in production. The idea behind the proposal was to permit the German vehicles to engage the enemy with the most effective armament with the minimum amount of protective armor. The E-75 "Standard panzer" was to be a heavy tank to replace the PzKpfW VIB Tiger II. The new vehicle would be armed with the 10.f cm KwK (L/68). This gun would have most likely required the redesign of the turret. The rate of fire would be reduced with the use of two-part munitions, and a second crew loader would be required, adding space for the additional crew. This vehicle never proceeded beyond the design proposal. 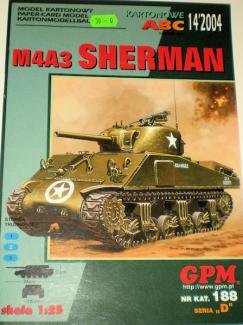 This kit represents the famous Sherman tank. I am not a Sherman tank expert but the title of the kit says it is an M4A3 version. I don't know if that's accurate, but who am I to argue.

The model comes in A4 book size and is hand drawn with some computer drawn revised parts. Instructions are provided in English, German and Polish with 4.5 pages of construction illustrations. The model was printed in olive green but not all parts are the same shade. Different pages were printed with different shades of green which results in the fenders, mantlet and appliqué armor being slightly darker. Even though there are some color issues, the built tank looks good and the printed texture (faded paint and shading) add immensely to the end result. 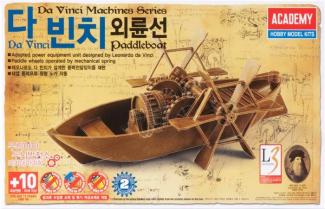 And now.. Something completely different!

I volunteered for this kit without knowing anything about it, never seen one nor heard of it. I am glad I did, this has got to be one of the most enjoyable models I have ever built, and what makes it so nice I can PLAY with it!

The kit comes package in a nice sturdy box with each tree in a separate package. There are 2 parts tree, a motor and a shaft. The instructions are quite adequate for assembly. There are no painting or decal instruction because neither are required. You do get an operating insert that is helpful. The plastic is brown with a wood grain pattern. 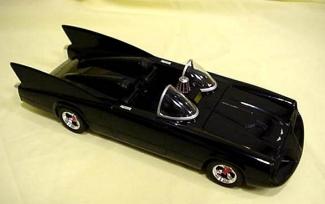 Batman has been around in comic book form since the 1940’s, and while he may not be able to fly or swing from spider webs of his own making, he has always had one thing that very few of the other superheroes have had: a really cool ride.

Playing Mantis (which owns both Johnny Lightning and Polar Lights) is coming out with a whole batcave-load of Batman-related vehicle kits in various scales and media. One of the first to come out is the die-cast 1960’s Batmobile in 1/24th scale. This is NOT the Batmobile from the TV show that we all know so well, but the Batmobile from the comic book. It is similar in many respects to the TV car, but it has some major differences. 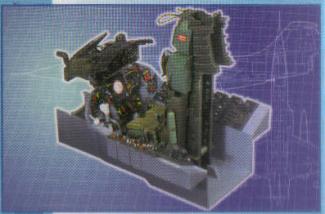 “The missile with a man in it!” is the way the F-104 Starfighter by Lockheed was described. Mach 2 speed and very high altitude was just a couple of the remarkable aircraft’s abilities. Even after marking it’s 50th anniversary in February 2004, there are a few left with the Italian air forces. They will all be retired by the end of 2004.