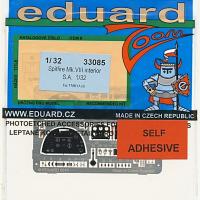 Editors note: This Eduard photoetch set is also contained in the recently reviewed Eduard Cat. #32679, also self adhesive. It is Fret Part 1 in the larger set.

Eduard Model Accessories has produced another fine set of photoetch parts to help complete your Supermarine Spitfire Mk. VIII. The set is for up-detailing the cockpit to a highly detailed replica of a Spitfire Mk. VIII cockpit. As an added bonus the parts on the fret are prepainted and have an adhesive backing. 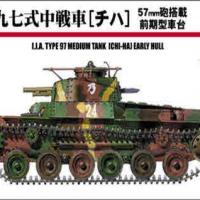 The type 97 medium tank Chi-Ha, designed in 1936, was the most widely produced Japanese medium tank of WW II. Its turret was fashioned with 26-mm thick armor sides and 33-mm on its gun shield. Its 57-mm main gun had already been proven in the early model Type 89 medium tank. It also sported a pair of 7.7-mm machine guns. Powered by a 170-hp Mitsubishi diesel it had a top speed of about 23-24 mph. Weighing in at 17.4 tons [US], it was the most effective medium tank the Japanese had. 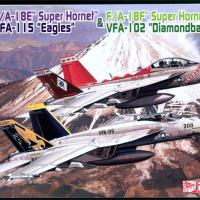 This kit provides aircraft and markings for two Super Hornets, the single seat F/A-18E from VFA-115, Eagles, and a two-seat F/A-18F from VFA-102 Diamondbacks. Both squadrons are based at NAF Atsugi, Japan.

The F/A-18E and F are redesigned, becoming the “Super Bugs”, larger than the F/A-18A through D aircraft. Other noticeable changes are the squared intakes and serrated edges on the main landing gear doors and several of the panels. These have reduced the frontal and rear radar signatures, making the E and F models almost stealthy, although not as much as the F-22 or F-35. One of the weaknesses of the early model Hornet was range. The E and F models overcome this by being able to carry 5 extra fuel tanks instead of the 3 carried by the A through D models. 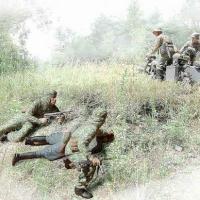 If some of this review seems like déjà vu all over again, it is, as this is the second time that I have been afforded the opportunity to review a Master Box BMW R75 motorcycle. But there are some great changes with this release. Included in this delivery is a photoetch fret containing parts to build up the wheel spokes, as well as five figures (two Russian and three German). A separate sheet is included for instructions on the wheel assemblies, with directions for assembling the figures shown on the back side of the box; along with a photo of the parts sprue for them.

I am still very impressed by what the folks at Master Box have released, as this remains a solid representation of the R75. 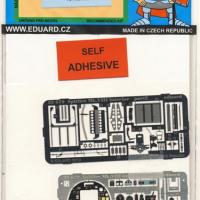 Eduard Model Accessories has produced another fine set of photoetch parts to help complete your Supermarine Spitfire Mk. VIII. The set is for up-detailing the cockpit and you should need to add nothing more to make the cockpit area a highly accurate replica.

As an added bonus the parts in this set are prepainted and have an adhesive backing.

There are two frets, made from stainless steel and a clear film with four marked rectangles to replicate glass faces on instrument panels and gunsight reflectors.