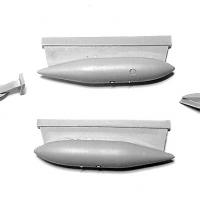 Packaged is in a clear face, white backed, poly bag stapled to a folded card along with a note sheet. It was clear the vintage KMC molds seem to be holding up pretty well despite the years. Upon opening the package I found the resin almost flawless, detecting only a few pinholes and heavy pour stubs. The details include nice gas caps and mounting points on the tanks. The wing tip fairings appear to be a tad small otherwise they look fine. Squadron included a note warning of “possible resin shrinkage” installing these fairings will require minor surgery of the kit, the wing tips will need to be trimmed to the panel line while remembering you must compensate for ‘resin shrinkage’. 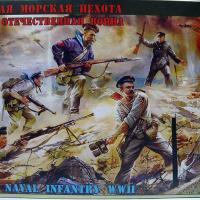 Due to the nature of the war with Germany the Soviet Navy took a back seat during the Great Patriotic War (WWII). However, one of the areas they were able to contribute greatly was with personnel.

During Naval Infantry’s early battles in 1941 and 1942 they showed high morale by their sheer willingness to accept high casualties during the desperate fighting for their own naval bases. Their stubborn tenacity unnerved the Germans, leading them to be nicknamed the ‘Black Death’ by their German foes because of this and their black uniforms.

ZVEZDA has put out a nice looking kit, lots of details and equipment. All the parts come on 2 trees, with an instruction sheet that has nice painting directions. 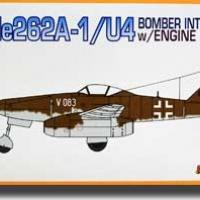 A little quick history. As the Germans got deeper into trouble at the end of WWII, the started trying more and more desperate things to try to stem the inevitable. One of these was to "up" gun the Me262 with a 50mm Mauser Mk 214A V3. That is what this kit depicts. Now to what's in the box: life for this kit started out in the Trimaster range many years ago (late 1980's or so) and the molds went to DML/Dragon who got rid of the white metal with plastic and now on to Dragons bargain line, Cyber-hobby. At the time of the initial release, the Trimaster kits were the most detailed Me262's around with, at the time, revolutionary photoetch included and extensive detailing. 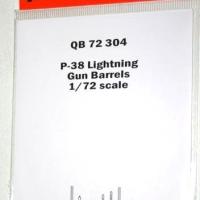 Quickboost just keeps adding to their great line of quality resin aircraft accessories. The latest addition is for the Academy P-38 Lightning. It is up to their usual standards; molded in off-white resin, smooth, seamless and bubble free. One thing of note is that they are really easy to remove from the mold block because of a nice perforation. It only took me a couple of light passes with my saw blade to make them fall away instead of launching into the air becoming snacks for the carpet monster. Another plus is that the gun muzzles are bored out which would be a real pain if you tried to do it on the kit part. 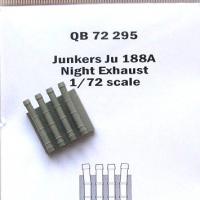 The quality of the casting is perfect and bubble free. The tips of the exhaust pipes are hollowed out for added realism. Most resin parts are likely to need more work on them than the more normal injection molded plastic parts that you may be used to. Why you ask, well Resin is a much harder material then the standard molded plastic in your kit. This is what gives it the fine details you are looking for. In some cases the greatest challenge can be cutting the part from the casting block without damaging it. I have found that it is better to cut away the bulk of the casting block, leaving just a small amount behind so that it can be trimmed away with a hobby knife.