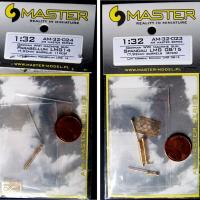 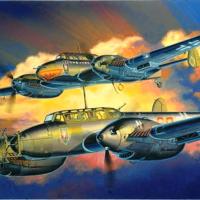 Before I get onto reviewing this model, I would like to give a little back ground information about this aircraft.

The Messerschmitt Bf110 served in the Luftwaffe throughout WWII. Even though it wasn’t very popular with the German pilots at that time it was developed into a successful night fighter, in spite of its poor handling characteristics. Later on it was realized what a great night fighter it really was and soon became the backbone of the German Luftwaffe night fighter wing of WWII.Some of these units were formed as early as 1940.

In August/September 1943, Bf110 aircraft shot down over 2700 RAF bombers. Also, in just one night, without fighter cover, these aircraft destroyed at least 120 RAF bombers. The Bf110D was a long-range heavy fighter and/or fighter-bomber, while the improved and up-armored Bf110E was designed primarily as a fighter-bomber. 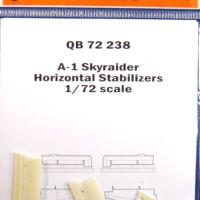 The casting of these elevators and stabilizers is as good as the original plastic parts in the kit. The stabilizers have a pocket trailing edge that accepts the rounded leading edge of the elevators perfectly and the fit is better than I could ever do if I had taken the kit parts and cut them apart. The resin is a cream color, but their web site shows some cast in gray, so I guess it depends upon the batch and what kind of resin they were using that day.

I looked through all of my Skyraider references, couldn’t find that many pictures of A-1s with the elevators displaced, except for those taking off or landing. But, if you want your Hasegawa A-1 to have displaced elevators, you really need these. They are a direct replacement for the kit parts. 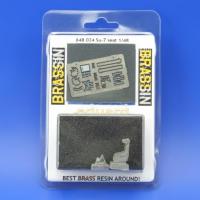 Czech manufacturer Eduard keeps expanding its Brassin line of aftermarket details this time with the release of the ejection seat for the KP Su-7 in 1/48th scale. A while back Eduard re-boxed the KP kit adding some aftermarket goodies, including this seat.

The seat is now available as a stand-alone upgrade for those that already have the KP kit in their collection. In my opinion, the seat is the weakest point of the whole (original) plastic cockpit and Eduard is offering us the solution.

Eduard provides you with 2 exquisitely molded resin pieces and a pre-colored photo-etch fret for seatbelts and other minor placards and color details. 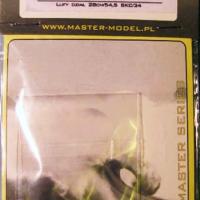 This is the third item from Master Model that I have had the privilege of reviewing, and once again, I have had a very positive experience with some remarkable items. The subject of this review comes from the Sea Master line of parts, in particular their 1/700 scale offering of 28cm/54.5 (about 11 inches) SKC/34 gun barrels as carried by the German ships Scharnhorst and Gneisenau. I volunteered for this particular review as I already had a Tamiya Water Line Series Scharnhorst (kit 77518) lying in wait in my stash, ready to accept these new parts.