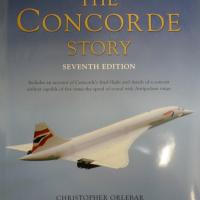 Let me begin this book review by giving a little background. When I saw that IPMS received this book from Osprey Publishing, I jumped at the chance to review it. The reason for my excitement to doing this review is that back in 1995 I was working part time as a courier, this entailed traveling all over the world delivering different packages that needed hand delivery and were time sensitive. One day I got a call at my office to go to Dublin, Ireland via Atlanta. That evening I flew to Atlanta to meet another courier and accept the shipment for Dublin. The other courier did not meet me on time to make my connecting flight to Dublin and the courier office told me to bring the package back to NY and that I would take the 9:00am British Airways Concorde flight the next day. 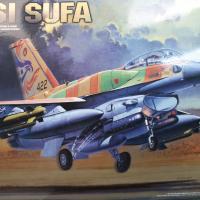 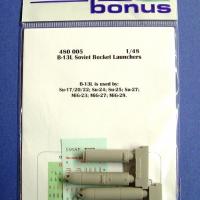 The B-13L rocket launcher was developed out of the Soviet experience in Afghanistan because the existing rocket systems lacked the punch to take-down stone houses, rock walls or cave openings. The ubiquitous 122mm rocket had the requisite explosive weight to do the job. So necessity being the mother of invention, the B-13L was developed to air launch to the 122mm rocket. The system was fielded in 1988, the final year of the conflict and it remains in the inventories of Russia and its current and former patron states. 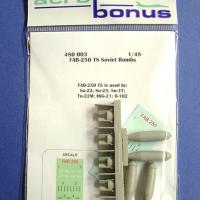 The FAB-250 is a general purpose dumb bomb with is widely manufactured and exported, similar to the US 500lb bomb. The have been widely used in the conflicts along the Russian (Soviet) border in Afghanistan, Chechnya, Nagarno-Kharabak and Georgia. You frequently see them carried on Russian multiple ejector racks. While they are available in numerous kits, Aires had release their version in an aftermarket package.

This set is crisply patterned and cast with very this fin detail in durable resin. The bombs have a nice shape, but lack some lug detail found on injection molded bombs included by OEZ/KOPRO in their kits. Since I don’t know the purpose of these lugs I can’t comment on their presence, but I have seen them in photos. The fit of the bomb to the fin is perfect, but some care will be needed to endure the fins are straight upon attachment. The set also includes a comprehensive decal set of stencils. 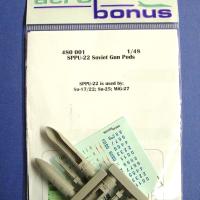 One of the more impressive Soviet/Russian weapon systems is the SPPU-22 gun pod. With two twin 23mm cannons it is used to strafe ground targets and can be adjusted from the cockpit to fire horizontal or up to 30 degrees down angle. Typically two are carried on an aircraft. A tactic peculiar to the Russian way of war is to mount the pods so that one faces forward and one aft. The aircraft can then fly down a line hitting targets coming and going – it has to be demoralizing to the recipients.;

Up to now the only source for these gun pods was the KOPRO (ex-OEZ) Su-25. The kit supplied pods are actually pretty detailed, but the gun system itself is very weak and would need to be scratchbuilt. Aires in their new Aerobonus line has released a new series of Soviet/Russian aftermarket weapons/weapon systems. First in line is the SPPU-22.