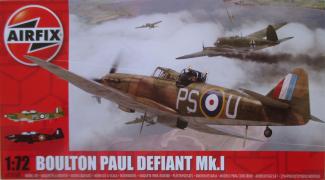 The “turret fighter” concept dates back to the early thirties, and contrary to some histories, the first Turret Fighter used by the Royal Air Force was actually the Hawker Turret Demon biplane, which was tested and operated by No. 23 Squadron from 1934. A hydraulically operated power turret was fitted to a standard Demon fighter, itself a development of the Hawker Hart light bomber, and a considerable number was produced by Hawker and Boulton Paul. The turret itself was a Frazer-Nash creation, and all of the Boulton-Paul produced Demons had them, and some were retrofitted to the Hawker produced models. By 1938, the Turret Demon was being operated by No. 23 and No.64 Squadrons, but the type was out of first line service by 1939, being replaced by Blenheim Mk. 1F’s. 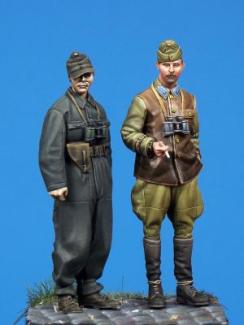 Krisztine Bodi is a European figure sculptor of some renown who started his professional career producing masters for the likes of Alpine, Young Miniatures and Mantis. As so often happens, Mr. Bodi eventually decided that working for himself might be the smart thing to do, so he set up his own line of figures under the brand name “the bodi”. The range now numbers nearly 100 figures in various scales, most covering the period of the Second World War.

My approach to reviewing these two figures sets (3 figures total) this time around is to provide you with photos taken by myself of the unpainted resin pieces, together with photos borrowed from the producer’s web site. This is because these beautiful sculptures deserve better than my almost non-existent figure painting skills have to offer. I want folks to see the quality of the resin parts, but also see what a good figure painter can then do with them. 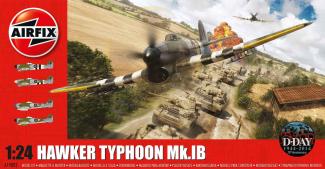 Welcome back! Last time we had just completed the internal framework, engine, lower front end and cockpit of the big 1/24th Scale Airfix Mk.Ib Typhoon. This second installment will bring the wings, fuselage, nose and wheel-wells together, leaving the final assembly and finish for the last segment of this three-part review. To recall: I chose to expose only the starboard wing’s gun bay and starboard engine detail, and to cover up the lower front end encompassing the oil cooler/air intake.

Work is going along very smoothly, with a single exception being the front end of the aircraft. Whether the problems I encountered were self-inflicted or due to some flaw in the kit remains to be determined. More on that later – for now, let’s get back to work!

The USS Akron and Macon were lighter than air (LTA) aircraft carriers built for the US Navy in the 1930’s. Filled with Helium, ach rigid airship was designed to carry five single-seat Curtiss F9C Sparrowhawks for scouting or two-seat Fleet N2Y-1 biplanes for training. A gondola was also designed to be lowered through the cloud layer for aerial surveillance. Both rigid airships crashed within two years after becoming operational. There’s a good article on these craft at: https://www.airships.net/us-navy-rigid-airships/uss-akron-macon/ . 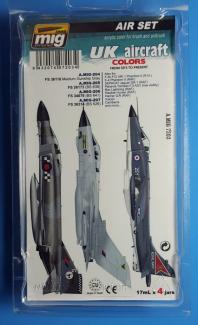 If you have been involved in modeling for the past ten years there is a good chance that you are familiar with the name Mig Jimenez. If you are not familiar with Mig, he is a Spanish modeler that has really came to the forefront of modeling techniques. Along with the techniques MIg has created a system of washes, filters, pigments and now paints. He also has several great modeling books out as well.

UK Aircraft colors from the 50's to present: This set is comprised of four 17ml bottles with dropper top. The four colors included in this set are as follows FS 36118 Medium Gunship Gray, FS 26173 (BS 638), FS 34079 (BS 641) and FS 36314 (BS 626). I used a single action siphon feed airbrush to apply them to an unprimed plastic card stock. I thinned the paint using the MIG Acrylic thinner at a ratio of about two parts paint to one thinner. Had no issues spraying through the airbrush and it sprayed out in a nice light coat. Took a few layers to build up a solid color.