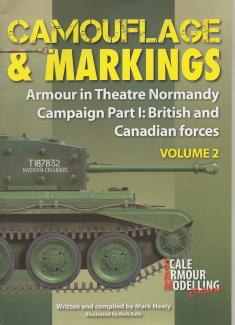 This book is Part I of Volume 2 of the Camouflage S Markings series from Guideline Publications, publishers of Scale Aircraft Modelling and Military Modelcraft magazines and the Warpaint series of books. It covers British and Canadian armored (armoured? – two countries separated by a common language) forces in Normandy.

Eduard’s newest line of accessories is fabric aircraft seatbelts and harnesses. This set includes two sets of ejection seat harnesses for Eduard’s L-39 Albatross trainer kit. There are 3 parts to each harness set, a set of shoulder straps and two lap belts. As the kit seat is pretty vanilla, so the addition of the fabric harnesses greatly improves the look of the seat. 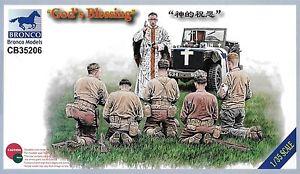 For a sometime now, Bronco Models has been releasing numerous military figure sets in 1:35 scale, and has particularly shown an eye for the not-so-typical. Sure, there has been the British AFV crew set and the U.S. Tank crew set, and both the 17 pdr and 25 pdr Anti-Tank gun crew sets. But they have also offered the British War Correspondents set and the Allied Female Soldier set. As a Minister, they then caught my eye earlier this year with the release of “God’s Blessing”, a 6 figure set depicting a Priest and five U.S. soldiers during WWII. The Priest (a Catholic Priest) is shown leading a front line mass, with his sacerdotal implements on the hood of a jeep. Kneeling before him are five soldiers, two of whom are holding Bibles (or, perhaps Prayer books). The box art captures this unique scene – worship in the midst of war. 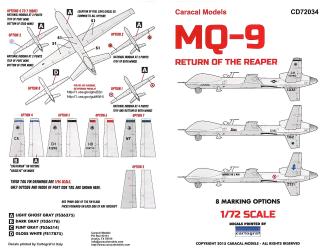 MQ-9 "Return of the Reaper"

This is the second sheet printed by Caracal covering the operators of the MQ-9 Reaper UAV. The sheet includes markings for four U.S. Air Force Reapers, and one each from the RAF, the French Air Force, the Italian Air Force, and a civilian version operated by NASA. I liked the French Air Force markings, but as their Reapers are unarmed, and I wanted to load up mine, I opted instead for the RAF Reaper.

While the Reaper is a relatively large UAV, there are not a lot of decals to be applied, regardless of which one you choose to model. The set includes enough of the stencils to decal two Reapers from the sheet, which is good as the Skunkworks kit is a double kit. 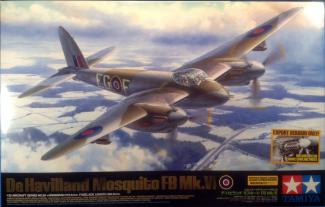 The Mosquito is one of my favorite aircraft with its underdog success story and exceptional operational history. Tamiya’s representation of the fighter-bomber version of the Mosquito is also exceptional. The following review is a compilation of the planning, preparation, and subsequent anticipation of a very enjoyable build of a de Havilland Mosquito FB Mk.IV aircraft. Please look for a complete build review soon, where I will report on how this elegantly packed kit progressed to large-scale representation of the “Mossie.”